The last year has no doubt brought great success for many young English talent. From the recent U17 World Cup success, to the U21’s triumph in the Toulon Cup, it really has been a successful year and one that is of great credit to the work done at the Saint George’s Park National Football Centre. As well as team success within the youth ranks, there have also been some individuals that have stood tall above the rest, inspiring their team to glory or cementing a place in the most recent England squad to face both Germany and Brazil.

Brewster joined Liverpool from Chelsea in 2015 at the tender age of 15. The youngster has thrived for both club and country. Brewster’s recent display at the 2017 U17’s World Cup proved to be pivotal in the squad’s victory. He scored an impressive 8 goals in six matches which saw him pick up the Golden Boot award, including the first goal in England’s fight back from 2-0 down vs Spain in the final. Is it only a matter of time before we see him on the big stage?

After loan spells a range of clubs including Reading, Burnley, Watford and Napoli, Chalobah took the leap of faith, leaving Chelsea for Watford this season. After his instrumental role in the England U21’s triumph in Toulon, Chalobah returned home to line up for Watford’s opening game of the season, a 3-3 draw at home to Liverpool. He has since become a regular for club and has also been included in England’s senior squad for games vs Germany and Brazil. 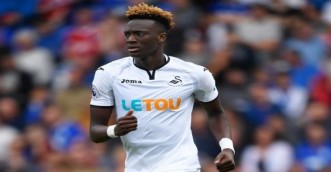 A familiar theme is occurring here, with another Chelsea youngster. Having finished the 2016/17 season with Bristol as the second top scorer in the Championship with 23 goals, Abraham gained an offer to play in the Premier League for Swansea City. He’s since scored an impressive 4 goals in 9 games for the struggling Swans and the rapid striker is fast earning a name for himself.

Arguably the brightest youngster at this moment in time. Foden has shone both for club and country recently. The 17-year-old is a regular in the Man City 1st Team training squad and has been hailed as “special” by Pep Guardiola himself- a manager who has coached the likes of Messi and Iniesta. He was undoubtedly the best player at the recent U17 World Cup and was awarded accordingly as he picked up the “Golden Boy” award. Foden had a magical tournament and scored two from midfield in the final vs. Spain, perhaps this is the catalyst for the start of a very bright future.

Winks may be a slightly more recognisable face. Despite only recently becoming a Tottenham regular, Winks has already lined up for Spurs at the Bernabeu and against his childhood hero Luka Modric. His consistency for club has also seen him called up to the England senior squad. Could we have the next Lampard or Gerrard in the making?