Reading stories to children often turns into a favourite activity, with tales of princesses and dragons, witches and wizards, or even just a very hungry caterpillar stimulating their imagination and expanding their horizons. Storybooks do indeed play an incredible part in a child’s development. Yet it is not just the ability for stories to provoke curiosity that makes them so important, but also their ability to teach.

In this week’s Perception lecture, Dr Jessica Horst, a faculty member at the University of Sussex and researcher at the WORD lab, discussed the importance of storybooks for babies and children, and characteristics that make learning words from them more effective.

Dr Horst first showed the audience the difficulty in teaching young babies to learn names for object categories using both real objects and stories. As an example, Dr Horst used her son James and his experience learning the word ‘tiger’. ‘Tiger’ could mean anything to James, so although we know that ‘tiger’ refers to a wild animal with black and orange stripes, we learn this through experience. James first encountered this word in the storybook, ’The Tiger Who Came to Tea’, but it was through probabilistic associative learning, determining the most probable and optimal solution given present constraints, that James learnt ‘tiger’. 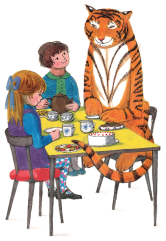 Illustration from ‘The Tiger Who Came to Tea’

However, ‘learning what something is not’, is just as important.

According to Dr Horst, children need to determine referent via syntactic bootstrapping (language structure) & other supports, using process of elimination & mutual exclusivity. Children use names of words already familiar to build understanding of other things, which raises the question: can a child apply a word to a new example of the same thing?

By asking children to recall a previously-fast-mapped name-object link after a delay, often in a new context, Dr Horst explored children’s ability to learn new words. Of course, research considerations need to be made when testing children, especially between ages of 2 to 4, as young children are bias to answer ‘yes’. It is also important to remember that children can only learn up to 3-4 words a day, meaning tasks should not be too easy or too hard.

Dr Horst told us about her two streams of research with different methods; learning names of objects (toys) and stories written in the lab. Each physical object or object in a story was given a made up name sounding similar to English, to make each object novel, as children love novelty. Every word we use now was in fact once novel. ‘Prequel’ became a word in 1958,  ‘ginormous’ became a word in 2007, and ‘Selfie’ became a word just a few years ago in 2013.

In this study, Dr Horst presented 3 objects to a child, comprising of 1 novel target and 2 known competitors. The child would be asked to name the unknown object, ‘Can you get the Pabe?’, but also the known object, ‘Can you get the cow?’ to make sure they were listening. To test if the child remembered the new word, they were then asked to pick up the new object out of 3 unknown objects. The same was done with stories based around objects, which subtly mentioned the names of the objects in them.

So, in the context of word learning… Is less more with fewer words? Dr Horst conducted a study where one group of 2 year old children was asked to put 4 differently named objects into a bucket through demonstrations of  ‘see the blicket’, whereas the other group was told ‘see this one‘ instead of the name. Those who only had one word performed a lot better, being 15 times more likely to choose the correct object.

This experiment was replicated with an iCub, a humanoid toddler robot that learns via unsupervised associate learning, to test if it could do what the children did. The iCub produced the same pattern of results, proving that learning fewer words at a time is more effective. 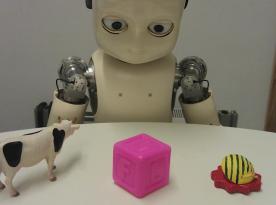 Storytime commonly takes place during bedtime, which is why Dr Horst questioned if sleep consolidation can facilitate learning beyond books. Through yet another study, it was found that children who take a nap after reading are able to recall words at a much higher accuracy than those who did not. This showed that sleep benefits are greatest if sleep follows shortly after leaning. Even short naps of 6 minutes can improve learning.

Through these studies, it was found that generally, less is more. Although more can sometimes be more, children learn more words with fewer words at a time, fewer objects at a time, fewer stories repeated, fewer illustrations per page, fewer combinations of object’, and fewer colours at a time.

Dr Horst’s research involves a wide variety of fascinating aspects of development and learning in children, making this a truly captivating lecture.